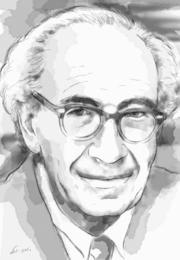 THE SHIELD OF DAVID:

A rain has caressed the desert,

And the sands are kindled with poppies and anemones;

Which with bright white light is satiate. –

And a caravan of ambulances, blazoned with a red Shield of David,

Winds upon the grey road northward,

Through Damascus, through Teheran,

To thee, Red Star over Kuibyshev.

A rain of blood is outpoured in muddy fields of Kuban,

Blood of Red Army men agrapple with the Unclean Foe,

Blood of the Unclean Foe, in payment for his barbarities.

And thy gift, Shield of David from Judah-land,

Is honest like thy battle-brave young lions in Tunisia,

For we are brothers in a common fight,

For the freedom of the world united answering.

What bring thy ambulances?


THE SHIELD OF DAVID:

Medicaments grown in the shades of the Gilboa Mountains,

Instruments of healing made in Ramat Gan and Nachalat Yitzchak, (suburb-babes of Tel Aviv),

And blood, the preserved blood of fathers and mothers, of youths and virgins in Zion,

Freely given for the veins of wounded Red Army men.

There shall flow in the veins of Soviet builders and heroes

The blood of laboring folk in Zion,

For a common fight is ours, one is our task, our fate.

The impulse of Zion’s resurrection was nurtured on Russian soil –

A rivulet of Russia’s freedom-stream,

A spark of her revolution-flame.

With the blood of Zion’s workers which joyful speeds to circulate to the rhythmic beats of Soviet hearts,

The rivulet returns to the stream,

The spark to the flame.

One is our foe, our light, our triumph.


THE SHIELD OF DAVID:

To thy strong torch, O Red Star, all mankind upgazes.

On thee Earth hangs her yearning for liberation.

How glorious thy ray

In the storm of terror-pangs and the Game of Death!

How perfect thy conjunction

With the rising-time of the saps of my land,

Time of panting for the Messiah:

Send forth a bloom!

How long wilt thou be buried?


Birth-hour of my nation’s redemption,

Honor to awakened Jerusalem on her mountains!

And for the trampled Jewish communities

Between the Baltic Sea and the Black Sea –

(Fighting remnants in Warsaw, I hear your call!)

Husks and blindnesses shall pass away,

And the truth of national liberation

And the truth of workers' liberation

Will know what they have ever known

(Now it is writ in a writing of creative bloods,

Together shed and in common veins coursing.

And woe unto those who cannot read the writing!) –

That they are one truth,

And one their commandment, their fight, their light.

This poem was Regelson’s first contribution to the Morning Freiheit, appearing originally in Yiddish on May 1st, 1943. It was subsequently translated by the author into Hebrew and English. Its first English appearance was in the English supplement of the Morning Freiheit on November 26, 1944.

Note on the text:

From 1933–1936 my father, Abraham Regelson, lived in Tel-Aviv with his family, employed by the newspaper “Davar”, where he was well recognized as a gifted Hebrew poet and expert on English literature and poetry, apart from his vast knowledge of modern and ancient Hebrew texts. The family had lost a baby boy to dysentery in 1934, and with another son’s life hopelessly ebbing away with malaria, and a fifth child on the way, in 1936 the family came to the painful decision to return to America. It was a time of great poverty for the family during those Depression years, and there was no employment for a Hebrew poet in NY other than random free-lancing and occasional translation work. When, during WWII, he was offered a job by the Communist Party’s Yiddish NY daily Morgen Freiheit, he could not afford to refuse. Though traditionally anti-Zionist, when Russia led allied forces against the Nazis, there was a warming of relations between the left and the Zionist cause. AR was hired as a columnist to bring stories of life in the Yishuv, articles about Hebrew and English literature, as well as Yiddish lore.. His first contribution appeared on May Day, 1943, with his Yiddish poem “The Shield of David Salutes the Red Star”, which later the poet translated into both Hebrew and English.

I had not known if there was any basis for the poem’s report of an ambulance bearing medicines and even blood donations which was sent as a gift from the Yishuv to the Red Army, though it was hard to believe that the story was an utter figment of the poet’s imagination. I have since learned about the “Liga V” organization, and saw that these events did in fact take place. Here’s a Wikipedia article on it, in Hebrew.